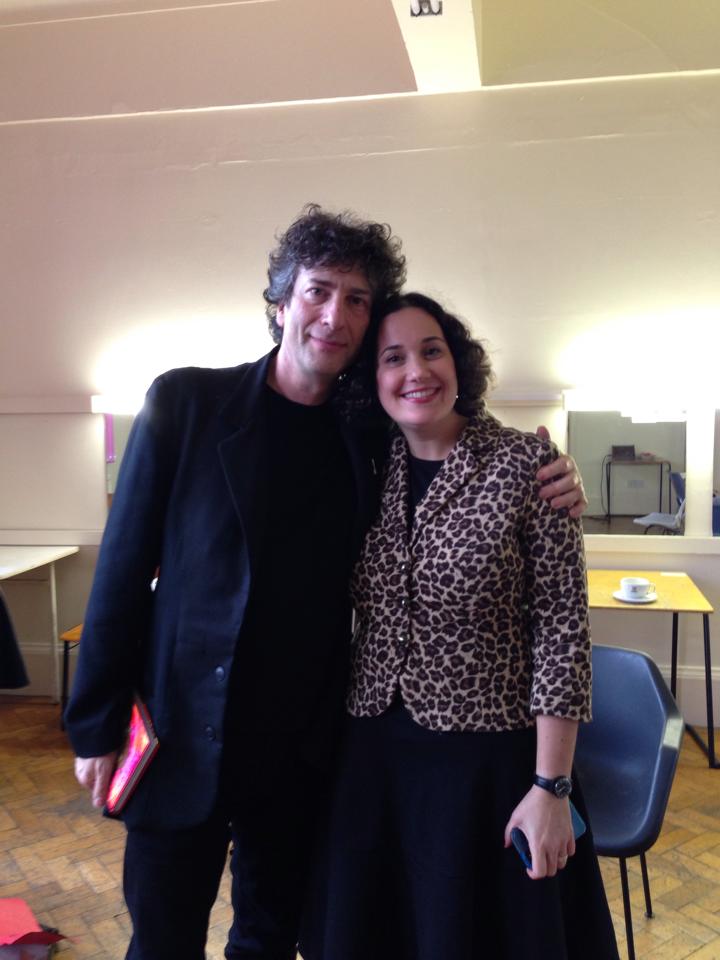 So I skipped summer again. I’ve just checked back through my archive and I haven’t managed to write a quarterly autumn update since 2009.  It’s no surprise given how busy my autumns usually are; most of the organisations, clients and projects I’m involved with have something big happening at that time. But it’s good to see that I’m being disorganised in a consistent way.

From Summer to Autumn was a big blur. We had the Manchester Literature Festival. I got to meet one of my literary heroes, Neil Gaiman, who was just as kind as he could be (that’s us up there. This is the only time I have ever had my photo taken with a famous person, and my friend Sarah Jane ambushed me into it, and I felt like a dork but I’m secretly glad she did). The Blog North Awards was capped off by a funny and moving new story from one of my favourite Manchester writers, Chris Killen. The literature fest was genuinely the biggest and best ever, and if you want to get a taster of what happened you can scroll through our little Storify page. For a more detailed account of what I actually do as MLF’s Digital Engagement Coordinator, here’s a case study about our digital marketing campaign.

Now, this time of year is my favourite. I can do stuff like attend conferences (like The Story in London next month), take online writing courses (thanks LitReactor) and plan and deliver a writer development programme for bloggers and emerging writers with Openstories. I’m working on that right now. The best bit is hearing all the good things that befell writers after winning Blog North Awards. Books published! Publishing houses started! Work commissioned! Ahhhh.

I’ve really enjoyed doing lots of work for the Arts Marketing Association on CultureHive, especially my latest project which has been to track down innovative thinkers working in libraries and get them to talk about the cool things they do, like putting books on bikes and lending out works of art.

I’ve done some social media strategy work for Greater Manchester Museums Group, who are about to launch an exciting project spreading the word about the treasures in our local museums called Our Connected History.

Openstories’ creative nonfiction project, The Real Story, has emerged from hibernation with Max Dunbar’s excellent essay about being institutionalised, Notes from the Smoking Garden.

My  workshops and speaking gigs have taken me  to Cardigan in Wales, where I led a blogging workshop at the gorgeous Do Lectures farm as part of their new workshops series, and vowed to return for Do Lectures one day. They do lots of interesting things, including publishing books. I had fun hosting and facilitating the Northern Lights Writers Conference in Sale. And I always enjoy hanging out at Castlefield Gallery in Manchester, where I led a session on blogging and social media for artists as part of their CG Associates network.

Writing: My work for Creative Tourist lately has focused mainly on restaurant reviews (recent faves include Lucha Libre and Ginger’s Comfort Emporium), but I also enjoyed writing a profile of Cumbrian art world provocateurs Grizedale Arts. I’ve also had a small essay (essaylet?) published over at Contributoria, a newly-launched site that has a fresh approach to community supported journalism. It’s about fish and chips and becoming slightly more British.

On the horizon, I’ve got  blogging workshops with Cornerhouse’s Digital Reporters this week and in Chester for WayWord festival on February 18, a panel about careers in writing at the University of Cumbria later this spring, and the launch of an exciting new identity and website for Openstories crafted by the amazing folk at Mark Studio. Shhh.

Non-work things: I’m reading Angela Carter right now and am in awe of her sharp writing and sly humour. I’ve also read  two good nonfiction books, Pulphead: Essays by John Jeremiah Sullivan and Gossip From the Forest by Sarah Maitland.  I also re-read some great music criticism:  In Love With Those Times: Flying Nun and The Dunedin Sound by Dave McGonigle writing in the sadly-long-departed Stylus in 2005. Clearly a labour of love, it uses the evolutionary theory of speciation to explain the way this genre emerged.Watched the first series of Girls which I hated at first but liked by the end. I’m apparently running a 10K in April. And I’m putting spicy red peppers on everything.

Writer. Not from around here. View more posts