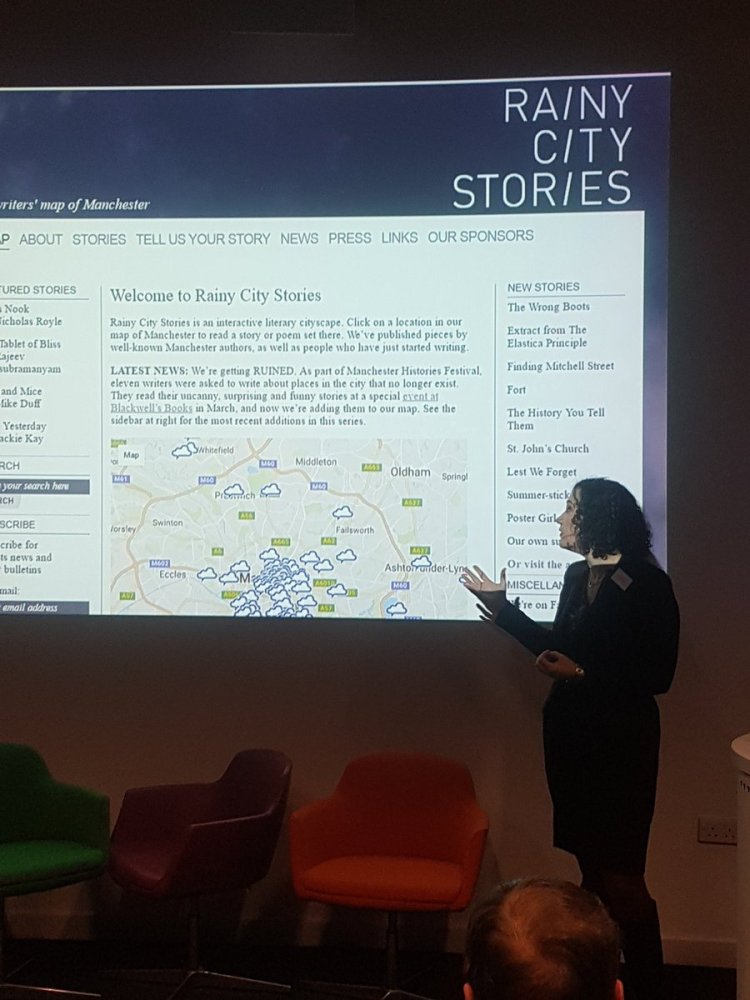 It’s been a busy time for speaking and teaching. In August I led a workshop on blogging and telling stories with the hugely inspiring Young Women’s Trust. In September I began my third year lecturing on the International & Digital Journalism MA at the University of Salford. In October, the Manchester Literature Festival took over my life:  this year I hosted discussions with Olivia Laing (The Lonely City), Writing the North with Jenn Ashworth & Andrew Michael Hurley, and an evening with performance poets Hollie McNish and Salena Godden.

In November I was keynote speaker at the Digital Storymaking conference at Liverpool John Moores University (photo above), talking about Openstories project Rainy City Stories (2008-14), place writing  and the development of interactive story maps.  It’s lovely to see a renewal of interest in this project, which continues to be something to learn from and enjoy.

The same month, I spoke in a panel on ‘Reaching your Audience’ at the National Creative Writing Graduate Fair and visited the Edge Hill University creative writing course as a guest lecturer on the subject of writing creative nonfiction. I was also interviewed on a couple of podcasts, returning to The End of All Things to preview the 2016 Manchester Literature Festival and popping up on the deeply silly Hey Fat Roland.

I’ve also been doing lots of writing and performing. My essay ‘Dear Shadow’ was highly commended in the Words & Women Prose Competition and will appear this spring in an anthology published by Unthank Books. My short nonfiction piece ‘Lemons’, was published in the Autumn/Winter 2016 edition of Irish literary magazine Banshee, and my lyric essay ‘Casting’ was published on Entropy in December. I’m working away on a thematically-linked collection of short lyric prose pieces; a couple more of these have been accepted for publication and will appear soon.

In September I  was commissioned to write and perform new beat-inspired work by Manchester literary organisation Bad Language for an event celebrating the launch of Off Beat: Jeff Nuttall and the International Underground at the John Rylands Library. Then, in October I was invited by First Draft to write and perform a new short story as part of Darkness Knocks, a special Halloween event at Chethams Library. In November, I performed at a flash fiction stage curated by literary night Verbose at the Transitions Festival in Bury, and in December read a pub nativity story (with carols performed by the audience) at the Kulning: Winter Songs event at The Castle Hotel.

Most of my time at the moment is devoted to redeveloping Openstories’ creative nonfiction project The Real Story, which has seen a marked rise in the number of submissions, is shortly to get a new website, and has a very busy series of events planned for 2017.

Writer. Not from around here. View more posts